Majestic Michael rises – he whose brow
Is crowned with castles, and whose rocky sides
Are clad with dusky ivy; he whose base,
Beat by the storms of ages, stands unmoved,
Amidst the wreck of things – the changes of time,
That base, encircled by the azure waves
Was once with verdue clad; the towering oaks,
Whose awful shades among the Druids strayed
To cut the hallowed mistletoe, and hold
High converse with their gods
– Sir Humphry Davy (Born Penzance 1778)

Hellen and I love taking the 25 minute drive from Trewena down to St Michael’s Mount for the day. It really is a magical place. Its one of the landmarks that you can simply look at for an age, and then as soon as you take your eyes off it they’re drawn back again, just in case you missed something.

Sat out there alone in Mounts Bay off the coast of Marazion, a priory was established on the Mount in 1135 by Bernard, Abbot of Mont St Michel in France. In 1659 Colonel St Aubyn bought the mount and his descendants still live there today.

The Cornish called St Michael’s Mount Carrek Los yn Cos, the Grey Rock in the Wood. At low water stumps of ancient trees can still be seen in the sands the stretch alongside the causeway that heads out to the island. These days the mediaeval church and castle still crowns the island and is the home of the St Aubyn family, as well as a 30 strong population of locals. You won’t be surprised to learn that the island is steeped in story and legend such as the famous tale of ‘Jack the Giant Killer’ recently was the home of appearance Corlys Velayron, also known as the Sea Snake in HBO’s ‘House of the Dragon’

At low tide the island can be accessed on foot by the famous cobbled pathway that the ocean engulfs as the tide comes in. At high tide you can still access the island by boat. Its well worth spending some time in the little village and harbour at the entrance to the island. Preserved by the National Trust its one of those places that feels like a step back in time. 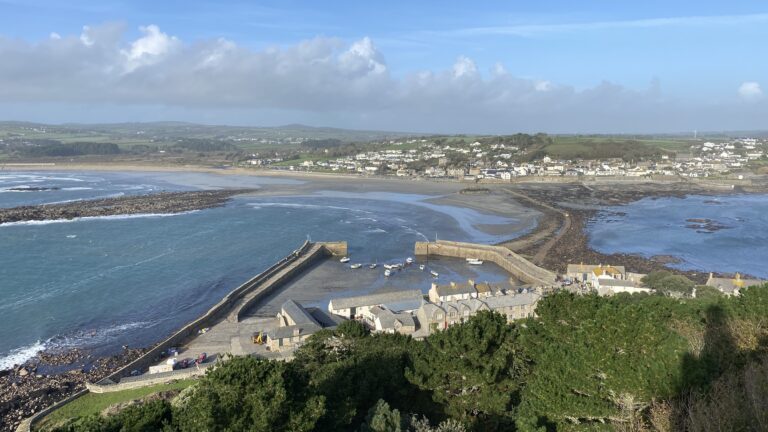 Heading up to the castle you have to climb the ancient cobbled ‘Pilgrims Steps’, and see if you can spot the ‘Giant’s Heart’ halfway up. The castle itself is really something special. Surrounded by towering battlements with wide reaching views out to sea an across to Penzance and the Lizard, as well as down to the village and the tropical terraced gardens below it really does feel like stepping into a fairytale,

The insides of the castle itself have been remodelled over the years from the monastery of old into the St Aubyn family home. Using the backdrop of medieval archoitechture and the eccentricities of monied aristorcracy the rooms on show are all quirky in their own right. We particularly like the model of the Mount which was made by a former butler of disposed champagne corks as well as the Samuri armour on display in the armoury. Visiting the castle also enables you to take in the elevated views from the terraces at the top of the building. The views are nothing short of spectacular.

At certain times of year access to the island is free on foot, but visits to the castle itself requires payment.

If you love exploring famous landmarks, Trewena holiday cottages near Falmouth are perfect setting for your visit to Cornwall. Just 10 minutes from the centre of Falmouth and some of Cornwall’s best National Trust and English Heritage properties, you can choose from ‘Little Avalon’ our 1850s labourers cottage, or ‘The Pigsty’ our converted barn.